Home About Périgord
Go to the top of this page

Périgord (Peiregòrd or Perigòrd in Occitan dialect), or Peirigord in Périgourdin dialect, is the name of the old county that covered what is today known as the French Départment of Dordogne. The Dordogne Département is mostly rural, and characterised by an important cultural, archaeological and historical heritage.

The name “Périgord” comes from a Gaulois people called the “Pétrocores”, or “Petrocorii” in Gaulois dialect, meaning the people of the “four armies”, but its history goes back much further.

Our region and, notably, the Vézère valley between Montignac and Limeuil where we are situated, were inhabited particularly early. This early occupation was the result of various favourable conditions.

First, during the quaternary era, the climatic conditions of the valley enabled deer, bison and other herbivores to live on the land.  These herds provided people with food and the clothes they needed to survive the cold (furs and skins).

The valley is also covered in shelters, under rocks and in caves carved out in the limestone by erosion. These natural cavities were the earliest sites to be inhabited by humans.

Finally, the large amounts of flint stone allowed the humans to begin hunting.

These different factors led to the permanent installation of humans in the region. Today, the number and the quality of the region’s prehistoric sites are testament to this. Black Périgord, birthplace of the first Western European cultures, is home to numerous artefacts such as the Lascaux Caves or the Cro-Magnon Shelter.

After the Gallic War, the region became one of the citadels of Aquitaine, the Roman province. The capital was called Vésunna.

The invasion of the Alemannis and the Francs ravaged the region, and in 507AD, Aquitaine fell into the hands of the Francs. Under the command of Clovis, the Francs conquered Gaul. In the 9th Century the Valleys of the Island and of the Dordogne were devastated by the Normans, who burned the churches and pillaged the monasteries.

In the 10th Century, the four Baronies of Périgord appeared: Mareuil, Bourdeilles, Beynac and Biron.

History would remember the words of one chronicler at the time, who asked: why have there only ever been four Baronies in Périgord?

The answer is simply that they only needed four Barons to hold the fort in case a Bishop, Archbishop or Prince came to visit!

In the 12th Century, the Cadouin, Sarlat, Boschaud et Chancelade Abbeys were founded.

Every year, the most important moments come in fall. The grapes are ripe, the harvests must begin, and its time for the ducks and the geese to be fed up. The knives are sharpened, as the season for conserves will soon begin. People pick chestnuts and search for wild mushrooms: the forest has provided them with food for centuries.

This is the time when the pigs, ducks and geese are slaughtered. It’s the time for conserves, for family meals. It’s also the time when we go out to pick truffles, and the time for the Marchés au Gras, as well as evenings around the fire, roasted chestnuts and young wines.

When the signs of spring begin to show, the people of Périgourd go out to work on their gardens. The re-awakening of nature at this time of year is a beautiful sight. The first tourists of the year begin to arrive.

In summer, there are many night markets. The day markets attracts numerous crowds: locals, old Périgourdins, and French and foreign tourists come to enjoy themselves. The roads of the towns and villages are packed with people. Meals with friends are the perfect opportunity to taste the conserves made during winter. This is the time we enjoy life! 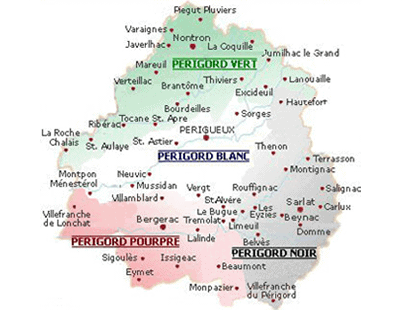 Today, Black Périgord, where we are situated (in Bugue, to be precise), defines itself by its exceptional collection of historical, architectural and gastronomic heritage sites.  It is home to more than 60 internationally recognised pre-historic sites.

With more that 352 sites listed as Historical Monuments, Black Périgord has the second highest concentration of historical monuments in France after Paris.

Finally, Périgord’s cuisine, known all over the world, is based on the famous truffles and Foie Gras. Périgord was built on Occitan culture, and its influence can still be felt in Périgourd today.

The architectural heritage brings together traditional “savoir-faire” and local materials. Although the product of popular culture, it always blends in harmony with the natural landscape.

The stonemasons, iron masons, flagstone masons, joiners and other carpenters all have distinct Occitan cultures and traditions. They are the creators of this architecture, which can above all be described as robust and functional.

Cretaceous and Jurassic limestone splits into slabs (flagstones) or ashlar. Flagstone roofs are characteristic of the landscape in Black Périgord. Angled at 45°, their weight varies from 500kg to 800kg per m², which means the walls must be short and sturdy to hold them. Buildings are therefore low with thick walls. This building method has been practiced since the Middle Ages and has lasted right up to today. Currently 12 flagstone masons still practice in Sarlat.

Other than its artisanal crafts, Périgord is also famous for its cuisine and natural produce, including:

Chestnuts: the emblematic product of Périgord, an essential part of its identity

As you have seen, our region has a lot to offer and welcomes you with open arms to come and discover all its beauty and gourmet delicacies.

In Périgord, it’s important to us that we share our culture, which is just as much our history as our cuisine.